Misunderstandings crop up simply because we’ve wished to not worry another.

Roger begins doubting his wife Brianna. She was violated by another man, and has most likely birthed the child of the rapist, who Roger loves with a vengeance. Simply because he loves Brianna and loves anything that comes through her. Brianna is paranoid about the safety of her child. She has overheard that the rapist is out and about in the area that she lives in. She hasn’t let Roger know. She draws the rapist obsessively and keeps trinkets from her two encounters with him.

She didn’t want Roger worried. But when Roger finds all of that in possession of his wife and those odd drawings, he starts thinking that it mightn’t have been a rape at all.

It isn’t a very far fetched conclusion is it? 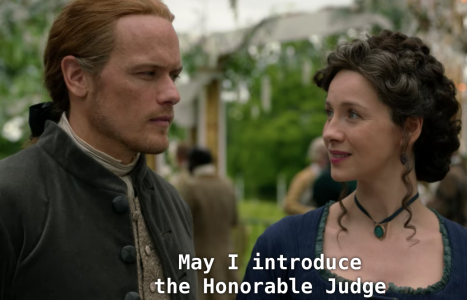 When Brianna travels back in time to alert her parents of their impending demise, she’s looked after by families that were her own. Good finds good, some way or the other. The trials that she’s put through, leads her straight to her family. And then despite being physically harmed and hurting, she finds her parents in a town where she just happens to be. Serendipitous.

But then so does bad find bad. The rapist is introduced to a person whose proposal for marriage Brianna had refused. He’s still hurting, feeling insulted and chances upon the rapist.

Brianna’s father was raped while he was in the war for freedom. He writes a heart felt note telling her that neither vengeance nor murder will give her peace. But if she finds it in her heart to forgive the person who has done her wrong, only then can she truly be free of it.

He makes sense. But then how do you forgive somebody who shows no remorse for what they have done? Brianna’s second encounter with the rapist was at her behest and simply an exercise in attempting to forgive him. When later she was asked if she did forgive him, she said “as close as I could come to my version of it”. But at that time, he was chained and sentenced to die for other crimes. Only he got free and is now roaming the parts that Brianna lives in.

This is one of the sub- plots of Outlander. It is a series that I watch on and off on Netflix. In no way is this blog post an advertisement for Outlander, but it is for story telling and creative writing.

As a writer, the storylines of various shows on Netflix and on their originals give me insights into how to craft stories. I am taking this space to share a few with you.

1. Storytelling is about the listener or the reader, it is very rarely to do with who has written the story or who’s doing the telling. If at time you find yourself struggling to give your protagonists a credible storyline, best to create small sub plots around them. Your protagonists should be comfortable leading their own lives, even as they live with each other through the story. Each character needs to have their own journey. As a writer that’s one thing that should be at the top of your mind.

2. Introduce struggle in what you write. Humans are drawn to it like moths to light. It is the struggles and the pains that we resonate most deeply with. We understand strife and heartbreak more than we understand love and forgiveness. Come to think of it, if your story read, like Jack n Jill’s (even in those few short lines, once came tumbling down), there wouldn’t be much of a story there.

3. It helps to have a flow chart for your story. Illogical storylines frustrate the reader and the audience, not unless it is riveting enough to keep them in place till it finally explains itself. Visually it might be a little less daunting because your mind, eyes and ears are occupied, so you have lesser chances of distraction. But while reading, unless your mind focuses, your eyes will have a mind of their own.

Netflix has taught me all of that with many more, mostly in the form of stories. Unfortunately it has become that I watch a series more for its storytelling technicality, than for the actual story. Maybe the day that I have published, I can once again go back to the story for it’s own value.

I have written on Money Heist  and on reading in times of Netflix. Be sure to give them a read. They are after all, inspired by stories.

Oh and this “misunderstandings crop up simply because we’ve wished to not worry another” is part of the story too.